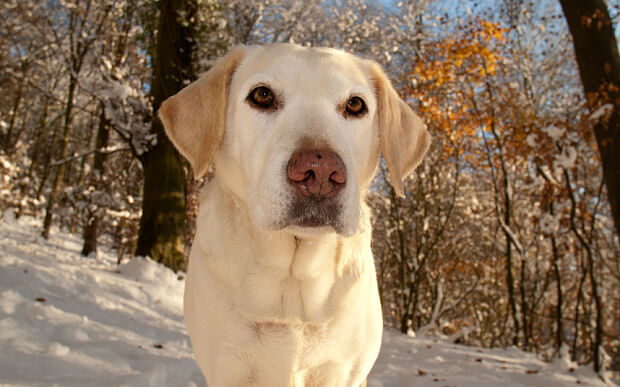 Labrador retriever breed of dog most likely to run away from home. Animals made famous by Andrex puppy TV adverts come top of list of runaway dogs compiled from survey of 2,000 owners by Blue Cross pet charity

Restless labrador retrievers are the dogs most likely to go walkabout, according to new research. The breed made famous by the Andrex puppy TV adverts emerged at the top of a list of runaway dogs compiled from a survey of 2,000 owners in Britain.

The breed in the “runner-up” spot was the cocker spaniel, which was followed by the Jack Russell and then the German shepherd.
The study, commissioned by Blue Cross pet charity, reminds pet owners that they have a year to make sure their pet is microchipped before it becomes compulsory by law on April 6, 2016.

The charity also advises that microchipping can help reunite missing pets with their owners after they admitted 1,673 dogs and cats last year because owners could not be traced.

Sarah Bussell, rehoming supervisor at Blue Cross, said that many dogs just want to play and explore, but it was interesting to see labradors came on top for being the most likely breed to run away. While Labradors don’t mean to become lost, if they catch a smell or see something exciting in the distance it can be hard to get their attention and call them back to you. And if you panic, sometimes they will get scared, so the best thing to do is try and remain calm and encourage them to come back to you with a toy or tasty treat.

She added that it is important to teach your dog good recall from a young age and also make sure your dog has a tag and is microchipped, to help the chances of you being reunited if they become lost. It also means you will be fully compliant with the law with new regulations about microchipping now just a year away.

The average dog owner has had the panic of losing man’s best friend three times already – and six in ten know other owners who have lost their pet, the study found.

However, one in five do not have their dog microchipped and half of these owners admit they probably will not ever have it done. While having a microchip is not currently compulsory, it will be in a year so those expecting to leave their dog unchipped could be facing a hefty fine.

It is already a legal requirement that dogs should wear a tag in public, but only 23 per cent of owners knew this was the case and only half knew the tag must include their name.