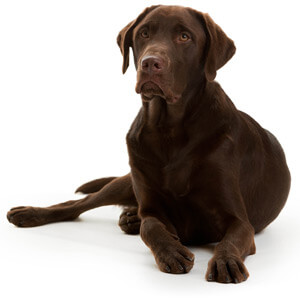 Labrador Retrievers originated not in Labrador as the name would suggest, but on the coast of Newfoundland in the 17th century where they were used to bring in the fishing nets for the fisherman. They were brought to Poole harbour in Great Britain in the 19th century where they became successful gundogs, whose purpose was to pick up shot game. Since then they have become one of the most popular family pets.

As Retrievers, Labradors have an excellent nose and a keen love of water. They are sociable dogs, loving interaction with both dogs and people. They bond closely to their owner and are usually good with children, making them ideal for our deaf recipients, particularly those with young families.

Labradors are easy to motivate during obedience and sound work training sessions as they love food, toys and having a fuss. As Retrievers, they usually love playing retrieve. This is a useful attribute for our recipients. They are also well-suited to people that suffer from balance problems such as vertigo, as they are a sturdy, steady breed once trained to walk to heel.

Labradors are not only easy to train and motivate, they are also usually easy to read, commonly having clear body language. This makes them ideal for inexperienced dog owners.

Labradors usually adapt well to changes, such as when they move from their volunteer puppy socialiser’s home, to a sound-work trainer and then to their recipient’s home.