Dwarfism is an example of an illness resulting from inbreeding.

There are other diseases associated with inbreeding as well. Inbreeding gives you a smaller gene pool to work with, but it’s what breeders do to keep a specific set of traits inside the labrador retriever lineage.

Sometimes, these abnormalities can be detected and might lead to some impairment of the senses as well. Although not all labs show negative impacts due to inbreeding.

Below is a short excerpt from an article that talks about dwarfism in labs and how this is a result of too much inbreeding: 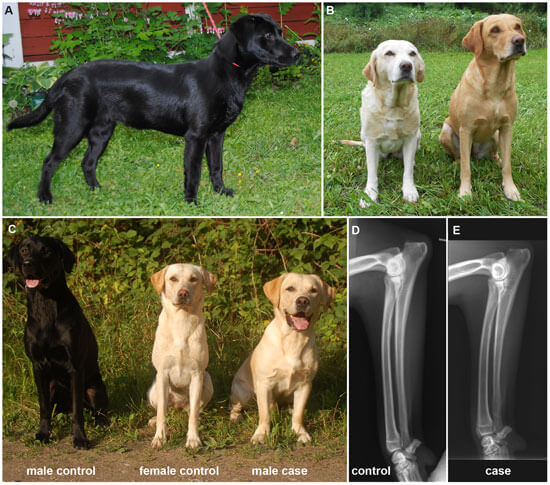 One heritable condition many people are not aware of in the ever-popular Labrador retriever breed is dwarfism. As can be seen above, some of the dwarfs have only slightly shortened legs, which can explain why the trait can be easily glossed over. Interestingly enough, there are at least two different forms of dwarfism in the breed: one (osteochondrodysplasia) with a more obvious bent-legged phenotype and the other (skeletal dysplasia 2 aka SD2) with more normal appearing, only subtly shortened legs…

…Inbreeding is risky business as it leads to an increase in homozygosity*. Related individuals are more likely to have identical versions of a certain gene, and if you breed them together, it’s quite likely that you will end up with offspring getting two copies of this gene, one from each parent. A lot of dog breeders think this is advantageous, allowing them to more easily select for a desirably trait. However, in all likelihood there will be bad that comes with this perceived good. There are numerous genetic diseases found in purebred dogs, and almost all of them appeared through inbreeding. This is why so many conditions can be traced to a single, common ancestor.

(* The state of possessing two identical forms of a particular gene, one inherited from each parent.)