Know how the current Labaradors came to be.

Read the brief description below and know where and how the labradors of today got their friendly and hardworking nature.

…Labradors were originally called a St. John’s Dog or lesser Newfoundland dog. The breed was in Newfoundland in the 1700’s and imported to England beginning the early 1800’s. The Labrador’s exact origin unknown but some speculate the Greater Newfoundland dog or the French St. Hubert’s dog is part of the cross that made the St. John’s dog.

Newfoundland was settled by English fisherman as early as the 1500’s and the St. John’s dogs seemed to develop along with the fishing occupation. The English fisherman in Newfoundland used the St. John’s dog to retrieve fish that had fallen off their hooks as well to help haul in fishing lines through the water. The St. John’s dogs were considered “workaholics” and enjoyed the retrieving tasks given in the fishing environment. This breed was very eager to please and their retrieving abilities made them ideal for hunting companions and sporting dogs.
…It was said that the dogs would work long hours with the fisherman in the cold waters, then be brought home to play with the fisherman’s children. The wonderful temperament of the Labrador Retriever is documented back to its early days in England and has made them ideal family pets as well as accomplished sporting dogs.

It was the early 1800’s that the first dogs were imported to England to a few aristocratic British sportsmen.

The earliest photograph of a Labrador Retriever was of the Duke’s dog named Nell. She was about 12 years old when this photo below was taken in 1856. 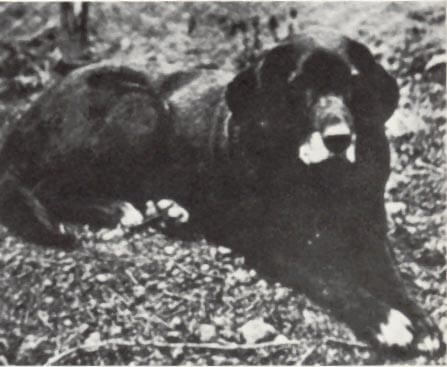 By the 1880’s nearly all the true Labrador (St. John’s dog) lines had died out in England. A fortuitous meeting of the third Earl of Malmesbury (at age 75) with the sixth Duke of Buccleuch (1831-1914) and twelfth Duke of Home (1834-1918) saved Labs from extinction. Buccleuch and Home were visiting a sick Aunt and decided to participate in a waterfowl shoot on the South Coast. There the two men were impressed by what Malmesbury’s dogs were capable of doing. These were the same bloodlines as their father’s kennels. Malmesbury reported that he had keep the blood lines pure as he could with the imported dogs from Newfoundland. Malmesbury gave them some of his dogs to carry on the breeding program. The dogs were Ned (born 1882) and Avon (born 1885). Many say that these two dogs are the ancestor of all British Labs. Buccleuch Avon is said to have sired ‘liver-coloured’ pups. This would be the ancestor of most American Field Champion chocolate line or chocolate gene carriers line. 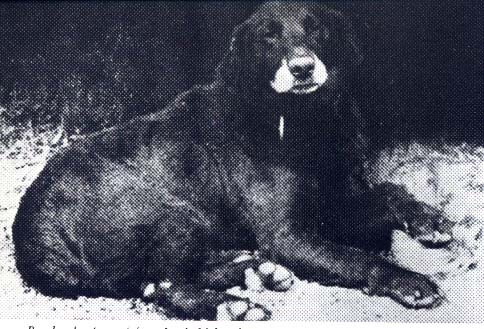