1. Raise pup outside in pen

…Any puppy relegated outside to the pen today, will grow up in relative isolation, deprived of the social interaction with people that he needs to develop communication skills, and more importantly, to develop the bond with people which gives him a desire to please.

That desire to please is the basis of a lot of reward based training. Without it you’ve made your job much harder.

2. Give pup an unlimited diet of uncontrolled retrieves “to develop his retrieving”

…Unlimited retrieves can put him in a state of exhaustion and physical pain.

…Pup did not inherit obedience and self control. That’s where he needs training and that’s where out-of-control retrieves are totally counterproductive.

Pup should have to wait for every retrieve he gets. Then you are training him to wait and to exert some self control.
…

3. Repeating commands to get a response

…One generally should employ a dominance technique such as a direct threatening stare or “looming over”. These techniques are both behaviors employed reinforce dominance by the pack leader in a canine pack.

…It is much more pleasant to have a responsive dog who responds quickly to the first command. Conversely, it is a pain in the neck to hunt with a dog that only responds when he’s constantly bombarded with a steady stream of repeated of commands.

4. Shouting at pup to get a response

…Shouting usually either excites pup, or it makes him afraid. Neither emotional state makes it easier for pup to do what you want.

…Do yourself and your dog a favor to make both your lives more pleasant. Don’t shout.

5. Changing the voice tone to begging when he’s out of reach

…You know the one. It has a question mark on the end of the vocalization.

…That tone signals “don’t obey”. Here is where consistency is the key in dog training. Always project yourself as if you are in total control. Act the same and use the same tones and mannerisms whether your dog is next to you and on a leash, or 200 yards away. You want to always keep in the bluff, regardless of how far away pup is.

6. Let pup run around out of control daily “to run off some energy” prior to training

This is a terrible practice.

…If you regularly let pup run off energy upon coming out of the house, pen, or car, you are simply training him to be out of control for the first 10 minutes around you.

…Training pup to control himself when he’s tired is not going to do you much good when he’s well rested, fresh, and in the duck blind raring to go. He will lack considerably in the self control necessary to make him a pleasant hunting companion.

7. Give Pup 10,000 marked retrieves before starting him on hand signals

Pup gets a marked retrieve every time he sees the bird or dummy fall and thus knows its location. A blind retrieve is that where pup did not see the fall and must be guided to it by his handler. 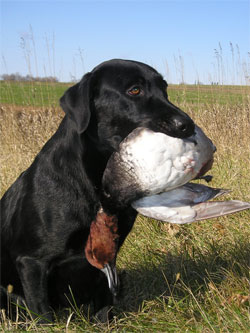 8. Testing instead of training.

Many handlers discover anew each day the limits of their dog.

…Structured properly, the lesson is a success with pup ending it quite confident on retrieves. Testing pup to see if he can do what you want is a universal human trait. It is also universally bad. The successful way to train a dog is to always engineer the lesson so that pup succeeds.

…Whatever you are introducing pup to, it is your job to insure that no unpleasant associations occur.

10. Changing the rules in the hunting field.

The two major bad practices you see in the field are:
(1)never using a leash.
(2) sending pup to retrieve while the bird is still falling.

…It makes no difference how much pre-season training you accomplish, when you get to the duck blind Pup is going to deliver to you the amount of obedience and control that you require in that setting. If you want pup to be under control in the duck blind, you have to tell him by demonstrating the limits of behavior.